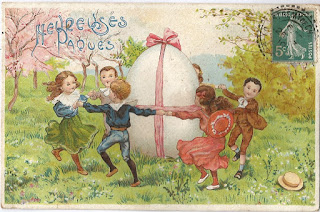 I wish you a very Happy Easter with lots of chocolate. It’s been a long winter so let’s hope that this weekend is a turning point for the weather.
Posted by Anji at 2:45 PM 2 comments: 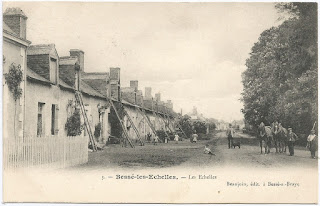 I think that this postcard is the photographer’s idea of a joke. There is no such place as Bessé-les-Echelles (Echelle = ladder), the village is called Bessé-sur-Braye. Each house has a ladder leading to the upper window. I wonder why. Were the houses built without stairs to the upper floor? I looked around on Google earth and although I found some houses of similar architecture; I didn’t find this particular row.
Posted by Anji at 5:11 PM No comments: 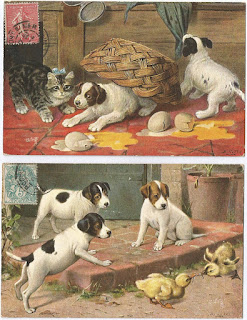 In 1866, Raphael Tuck and Sons started printing pictures and greeting cards in London. In 1893 Queen Victoria granted the firm the Royal Warrant of Appointment, which was continued by future sovereigns. Their first postcards were produced in 1900.

They produced many sets of illustrated postcards by notable artists of the time. Including sets of their famous “Oilette” postcards; some of which are textured to look and feel as if they have been painted in oils. I’ve written about Tuck’s postcards in the past.

These two postcards, illustrated by B Cobbe and posted around 1907, were published as part of a set by the Parisian branch of the company.
Posted by Anji at 3:15 PM No comments: