The elf and the rose 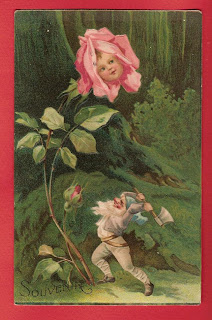 Yesterday was an auction day for us. We got soaked on the way there, frozen in the auction room and our train was delayed on the way home because of problems with an unruly passenger. The cards we bought were very good though, so it was worth it. I love this one.

Baby in a basket 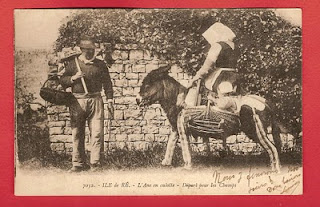 In the 1920s a working mother had to take the baby with her to the fields. It doesn’t look too comfortable, but Ré island is small so there wouldn’t have been far to go. 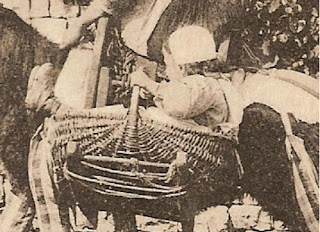 For newcomers to this blog, the donkey is wearing pyjamas to protect its legs from mosquito bites.
Posted by Anji at 4:40 PM 8 comments: Links to this post

This blog especially lends itself to a special post of remembrance. Over the last few years I’ve read a lot of postcards written at the front. Boys writing home – some of them could barely write. Men writing to their wives and children. Some in a hurry some with time on their hands….

Some postcards of World War One 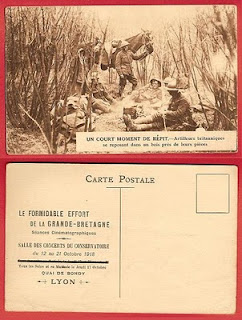 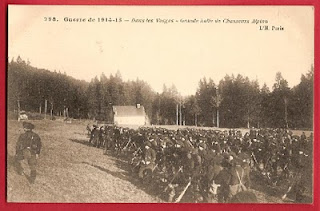 Les Chausseurs Alpins, French soldiers with special knowledge of the Alps. Thousands were killed in avalanches as well as battle. 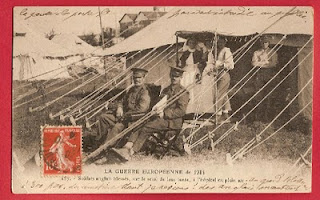 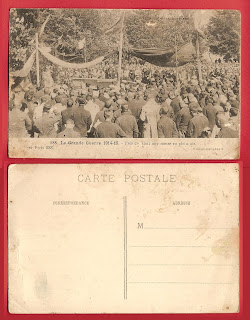 Masses were held at the front too

And to finish; a few lines from Wilfred Owen. Killed a few days before the Armistice, he was 25 years old. A verse from ‘The dread of falling into nought’

My power of life, though youthful, also sinks;
Before my time I bear a hoary head;
And chill airs strike my brow, that blow, methinks,
Straight from the icy cavern of the dead.
Night darkens round; my day shall know no afternoon.

Other posts on World War One.
Posted by Anji at 9:51 AM 4 comments: Links to this post

We managed to acquire some very rare, old postcards of the Réunion Islands. The cards are all in very poor condition, but still very collectable. 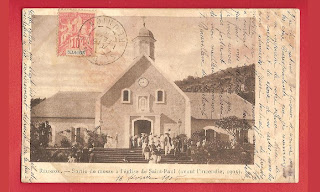 Here’s one of them. People are leaving church after Mess. The church burnt down in 1905 and the postcard says that the picture was taken before the fire. It’s interesting to see that the card was written on February 16th 1905! There was also a cyclone on the island during the early years of the 20th century.

A link to the Réunion department of our store.
Posted by Anji at 9:07 AM 2 comments: Links to this post 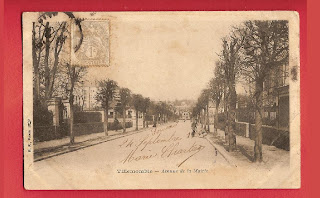 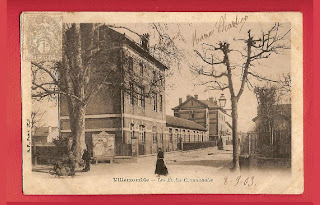 These two postcards are here simply because I love the name of the town where they come from; Villemomble. The cards were sent on 1903. Today the town is in the suburbs of Paris.
Posted by Anji at 7:28 PM 4 comments: Links to this post