Interesting things to do with postage stamps 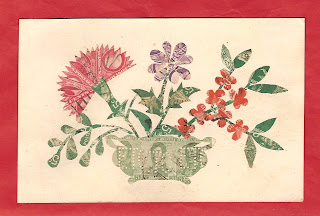 Here’s an original postcard. The flowers have been cut out from postage stamps. I can see stamps from the US, Argentina and France. The card was sent in 1923 to announce a wedding on 4th June.
Posted by Anji at 2:47 PM 7 comments: Links to this post

Pierre Loti and his cats 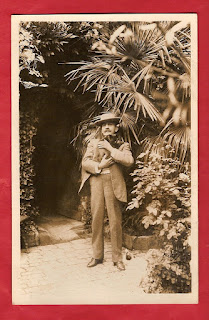 This isn’t just a postcard, it’s a photograph with a postcard back, which makes it quite special. On the back is written that the French author, Pierre Loti, is holding his cat Belkis. Belkis was a white Angora, so it couldn’t have been her. Pamouk was his darker angora cat and at his feet perhaps we can see Moumoutte Blanche. Pierre Loti loved cats and became the honorary president of the French Society for the Protection of Cats in 1908.

He also had visiting cards printed for his cats
Posted by Anji at 5:22 PM 7 comments: Links to this post 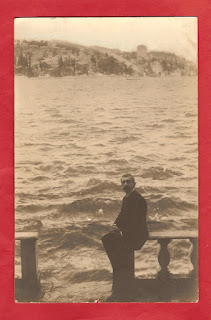 This is a photograph in the form of a postcard and therefore possibly rare, if not unique. Pierre Loti, a French writer who lived quite close to where we live, sitting on the balcony of a house in Constantinople. This isn’t the first time he’s been involved in our postcard collection. We even managed to find his autograph!
Posted by Anji at 5:39 PM 2 comments: Links to this post 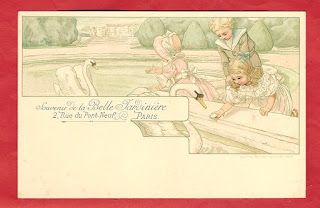 I think that this card is exquisite! The colours are lovely and the card is in excellent condition. You can read more about La Belle Jardinière here
Posted by Anji at 4:45 PM No comments: Links to this post King of the United Kingdom and the British Dominions and Emperor of India from 22nd January 1901 (Crowned 9th August 1902), until 6th May 1910. His mother, Queen Victoria, excluded him from political power and so until almost the age of 60, he led a fashionable leisured life. Once King, he modernized the British Home Fleet and army medical services and reorganized the British army. He fostered good relations with other European countries, especially France, but his efforts could not prevent the outbreak of the First World War 4 years after his death. (Information thanks to Wikipedia)

Wikipedia says that he was crowned 9th August 1902, whereas the postcard says June 26th. Which is correct? The coronation was scheduled for 26th June, but the King needed an emergency appendectomy operation and so the coronation was postponed by a few weeks.

Footage of his coronation coach