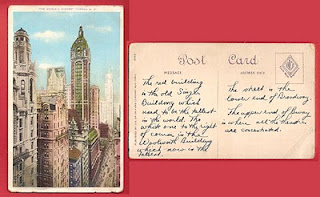 This postcard dates between 1913 when the Woolworth Building was built and 1931, the year that the Empire State Building was completed. The Singer building was demolished in 1967

“ The red building is the old Singer Building which used to be the tallest in the world. The white one to the right of course is the Woolworth building which now is the tallest. The street is the lower end of Broadway. The upper end of Bway is where all the theatres are concentrated.”
Posted by Anji at 5:16 PM 8 comments: Links to this post 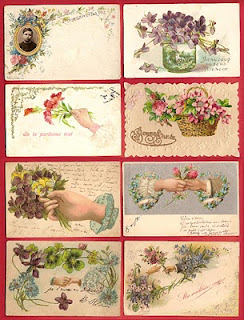 I found this bouquet of flowers to cheer up an October evening
Posted by Anji at 9:34 PM 4 comments: Links to this post

A photograph if this Calvary recently appeared on another blog . A few days later I came across the postcard in our collection. I thought I’d post it here as it is an interesting subject. As usual the local children have wriggled themselves into the photograph.

Here is a link to Caroline’s photos where you can see the top of the cross in more detail. She tells me that it is made of granite!
Posted by Anji at 9:26 PM 5 comments: Links to this post

A collector of postcards

We’ve recently acquired some postcards from a collection which are in very poor state. Many of the cards are falling apart, have been nibbled by insects or have foxing (rust stains). The postcards were collected by a young woman from around 1902 onwards. She posted an announcement in “Le Petit Echo de la Mode” (magazine founded in 1880) looking for people willing to exchange postcards with her. This is what makes her cards so special, even though they are in such bad condition. The cards that she received were carefully selected by other collectors. A lot of them are unusual and rare. Not your usual tourist cards at all.

This card from Calais is interesting because it is a photograph of the shop run by the photographer himself. If that his family in the doorway?
Posted by Anji at 9:11 PM 3 comments: Links to this post