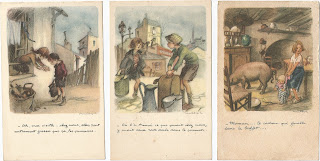 Three postcards illustrated by Francisque Poulbot for the “Ligue National contre le Taudis” (League against squalor) which came into being in 1927.

Here you see children discussing the size of fleas, a pig in the larder, and two children talking about the dreadful smell in an apartment being two dead rats under the mattress. They are beautiful but heart breaking postcards.

Later ‘Poulbot’ became the name for the poor children of Montmartre; descendants of the original children that inspired his paintings.
Posted by Anji at 2:23 PM